The Lackawanna River, once no more than a polluted coal region artery, is being restored thanks to a conservation group, a utility and a pipeline builder.

This is a beautiful story about a beautiful river that courses through the Lackawanna Valley, providing a trout stream in the midst of what was once known only as coal country. Indeed, how well I remember crossing over the river as a child in our family car and immediately being detoured around collapsing portions of the street due to underground mine fires that spewed smoke into the air.

The scene was so other-worldly the Saturday Evening Post even did a story on it in 1963, but today things are different and the Lackawanna River is now a trout stream thanks to the efforts of many, including the Lackawanna River Conservation Association. Moreover, the efforts continue and pipeline development is helping big-time with huge contributions from gas company UGI and utility contractor Linde Corporation. It’s not a new river but, rather, one “restored to glory.”

The story, beautifully narrated by Linde Corporation’s Communication Director, Kevin Lynn, is, as the title says, the “Culmination of Cooperation” by the Lackawanna River Conservation Association, UGI and Linde. Linde Corporation was contracted by UGI to build a gas pipeline underneath a rail trail along the river, with attendant conservation measures taken throughout the process. The rail-trail not only opens the glory of the river up to public appreciation, but also buffers it from the sorts of activities that once polluted it.

The video is about 11 minutes long but well worth the hike down the trail. Just click to play: 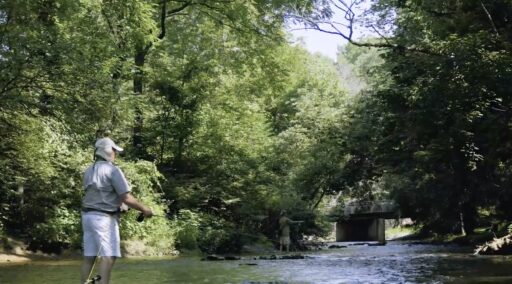 Scott Linde of Linde Corporation shepherded video development, having been a proud part of the overall project. He should be proud. This is yet another example of the positive multiplier effects of the natural gas industry; another demonstration of the community sustainability being wrought by companies that, in contrast to the past, are doing it right. It’s a beautiful story. And, it’s not over yet. There are still miles to go.